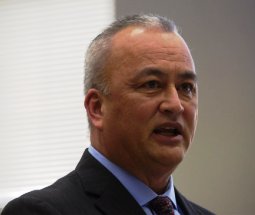 Dan Pacholke is the former Secretary of the Department of Corrections in Washington State. He has been a strong advocate and a leader in the quest for cost saving and socially responsible prison reform. Along with Evergreen College and Professor, Dr. Nalini Nadkarni, Dan co-founded the groundbreaking Sustainability in Prison Project.

As the Senior Advisor for Corrections in the State of Washington, Dan has implemented many cost saving rehabilitation programs involving both offenders and correctional staff, including advanced rehabilitative educational opportunities and unique job training. He has demonstrated leadership in reform as he targeted gang violence in high custody prison settings, providing meaningful ways for inmates to contribute to society. His leadership in this area is part of a system strategy that included other cutting-edge interventions such as deterrence models that provided for safe harbors for special populations throughout the prison system.

Washington’s Governor Inslee praised Dan for being widely recognized as an advocate for innovative prison change and for the operation of safe, humane prisons.

Dan has held multiple positions as a leader in prison reform. He served as the Superintendent at three Washington state prisons prior to becoming the Prison Administrator for Command West in 2008. In 2010, he was appointed as Assistant Secretary over the Prisons Division.

At the Stafford Creek and Monroe Correctional Complex he served as Superintendent and he was instrumental in implementing advanced practices including emergency response training academies. He also brought prisons into focus as a community resource through the Sustainability in Prisons Project.

In 2014, Dan co-authored the book titled Keeping Prisons Safe: Transforming the Corrections Workplace. He can be viewed on Ted Talks, where he shares his thoughts on prison reform and inmate rehabilitation.