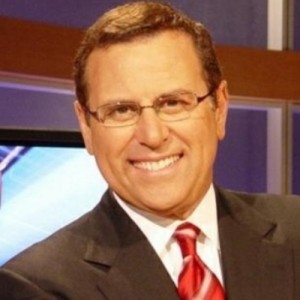 As an Emmy Award winning veteran newsman, Carlos Amezcua has spent more than 35 years analyzing and commenting on global events. He is an advocate for responsible journalism, and a powerful speaker, revealing his insight on all matters pertaining to financial security and physical safety.

From his early days anchoring morning drive radio news, Carlos showed an unflappable ability to report breaking news. As an aggressive young journalist, Carlos reported major stories on the CBS Evening News with Walter Cronkite and later with Dan Rather. Hurricane Gloria, the Mexico City and Northridge earthquakes, the Malibu fires and the eruption of Mt. St. Helens are just a few of the natural disasters he has covered.

A major turning point in his career at CBS was the infamous Macdonald’s Massacre in San Ysidro, California. His steady, round-the-clock reporting, nationally and internationally, earned him numerous press awards.

For 17 years, Carlos worked as the co-anchor of the top rated KTLA Morning News. He and his team are widely credited for changing morning television in America with innovation and personality. In 2006, The National Hispanic Media Coalition honored Carlos with its National Impact Award for excellence in broadcast journalism. During his years as a news anchor, his professional and steady demeanor has been credited with reassuring viewers through live coverage of the LA Riots, the many fires and earthquakes, the massive flooding and mudslides. The Daily News called Carlos Amezcua, “LA’s Best Anchorman.”

He has appeared as a guest host of radio shows on ESPN Radio, KFI and KEIB, and served as the on-air voice for the annual national Latin Grammy Awards broadcast.

Carlos has been awarded a total of 22 Emmys including one for ‘Outstanding Journalistic Enterprise’ and another for his coverage of Mexican politics. He also received awards from the Associated Press, The Radio Television News Association’s “Golden Mikes” and was part of the team that won the prestigious George Foster Peabody Award. He is a role model for Hispanic youth and any person who aspires to achieve more in life.