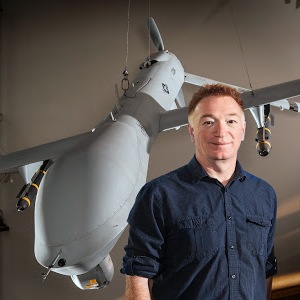 Scott Swanson is a retired United States Air Force (USAF) officer, pilot and acquisition professional with over 20 years of service in Special Operations, Rescue and Special Reconnaissance. He is a pioneer in unmanned systems, including the Predator Unmanned Air Vehicle (UAS).

In the fall of 2000, Scott was asked to lead the flight operations team using the Predator drone to search Afghanistan for terrorists—including Osama bin Laden—who had already been identified as threats to the security of the United States. Under his leadership, the special projects team proceeded to rapidly arm the Predator with the Hellfire missile.

Immediately following 9/11, he and his team returned to flying missions in Afghanistan. During the opening night of the air war, Scott and his team had the distinction of firing the first missile from an unmanned drone in combat that day, striking the bodyguards of Mullah Omar, the leader of the Taliban.

With drones now saving the lives of military personnel, it can be argued that the breathtaking shot, and the subsequent use of drones in warfare, was as important as the invention of the airplane itself.

About his work, Scott said he wants to connect with people, to tell them how seriously he takes his historical military contribution. Scott’s participation in the effort to eradicate terrorism was recently revealed in a story told to Wired Magazine writer Arthur Michel: “The world is not black and white,” he quotes Scott, “It’s shades of gray presented to you in an infrared image.”

As an Air Force officer, Scott began his career flying rescue and special operations helicopters and was credited with nine saves over his career. He has been awarded the Knight award and the Eaker award for outstanding airmanship while performing open ocean rescues.

A published author, he has also served as an executive in the aerospace industry and has been featured on ABC News, CBS News, The Smithsonian Channel, and Breaking Defense.

As an international business and military consultant, Scott uses his leadership skills to strategize and help businesses and government entities achieve excellence. He is adept at assessing the commercialization potential for emerging technologies and leading teams to rapidly field special projects.

Through public speaking, Scott is now sharing not just his experience in combat, but his thoughts on technology and the future of U.S. security.